Mailbox surprise: behind the hedgerow 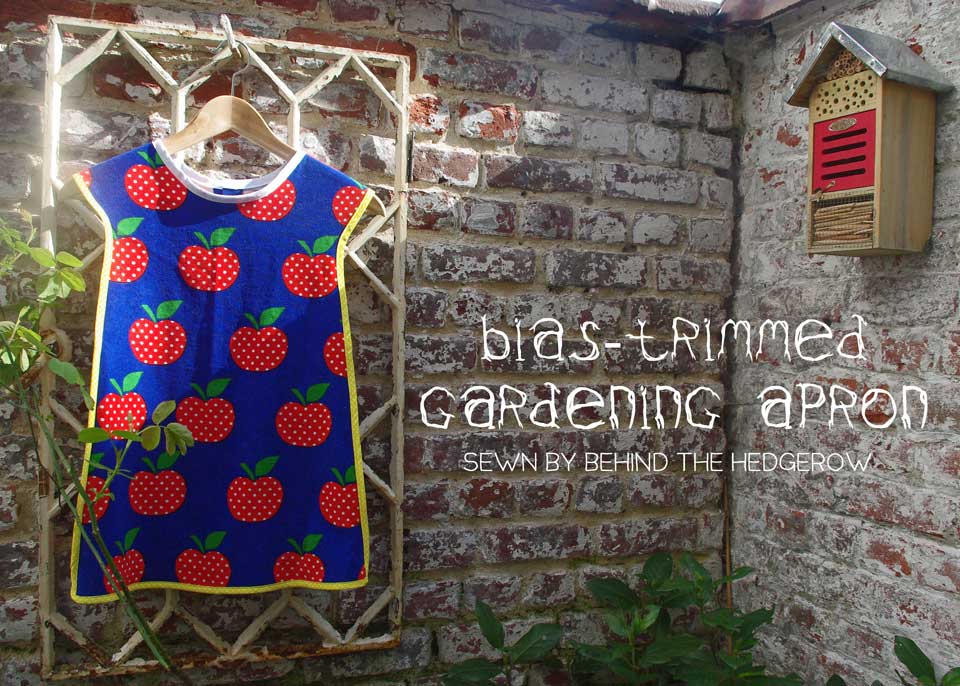 Today it’s Laura’s turn to show her Mailbox surprise creation. I’ve always been a big fan of Laura’s work and this apron she made is super cute! Love this idea. What a pity that we only have a small garden… :(

I love all seasons – each one brings a shift, a new start, a rejuvenation.  Having children around compounds this sense of new beginnings as each new change in the season is greeted with glee and celebration.  As adults we take much for granted and it sometimes takes the smaller members of our society to remind us of the thrill and excitement that Mother Nature has to offer at times of seasonal change. 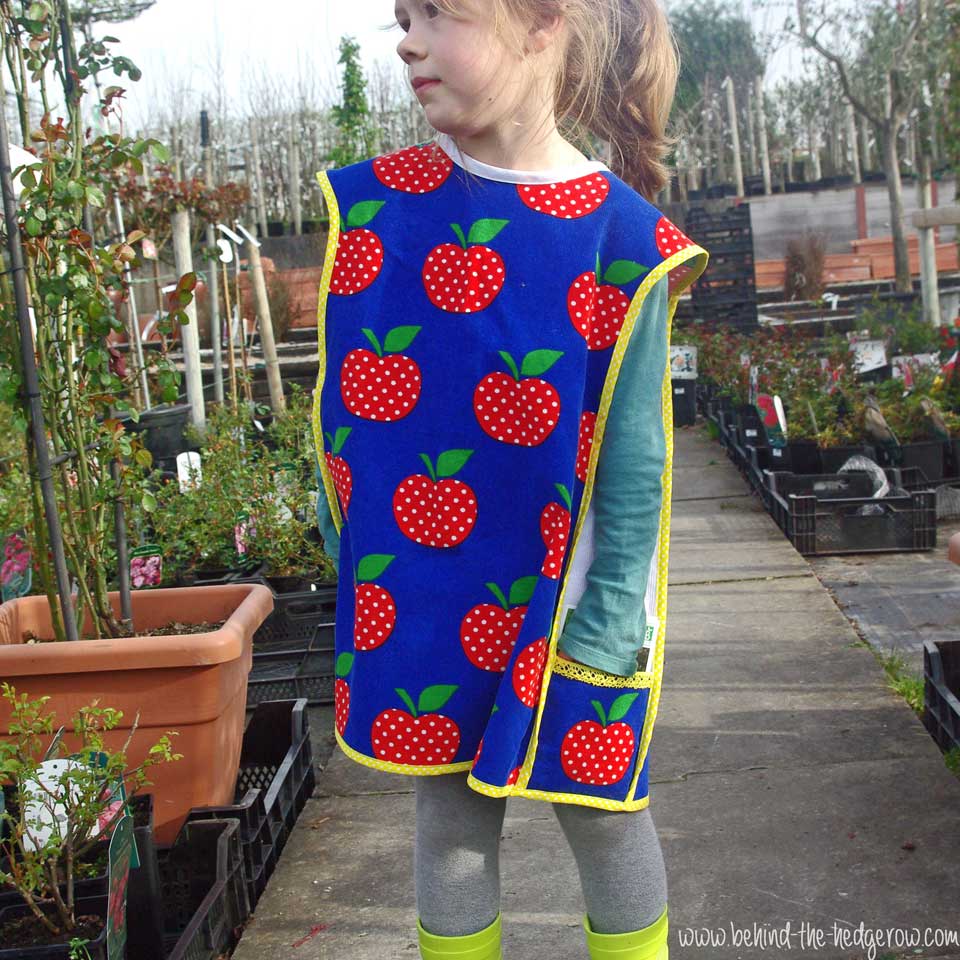 Spring is a perfect case in point.  Even city living holds its fair share of seasonal marvels – the new pink buds on the cherry trees in Boitsfort, Brussels that we pass on the way to football (soccer) training, the insanely abundant pastel-coloured chocolates on display in all the chocolatier’s windows, and the first whiffs of a BBQ from a neighbour somewhere across the block. 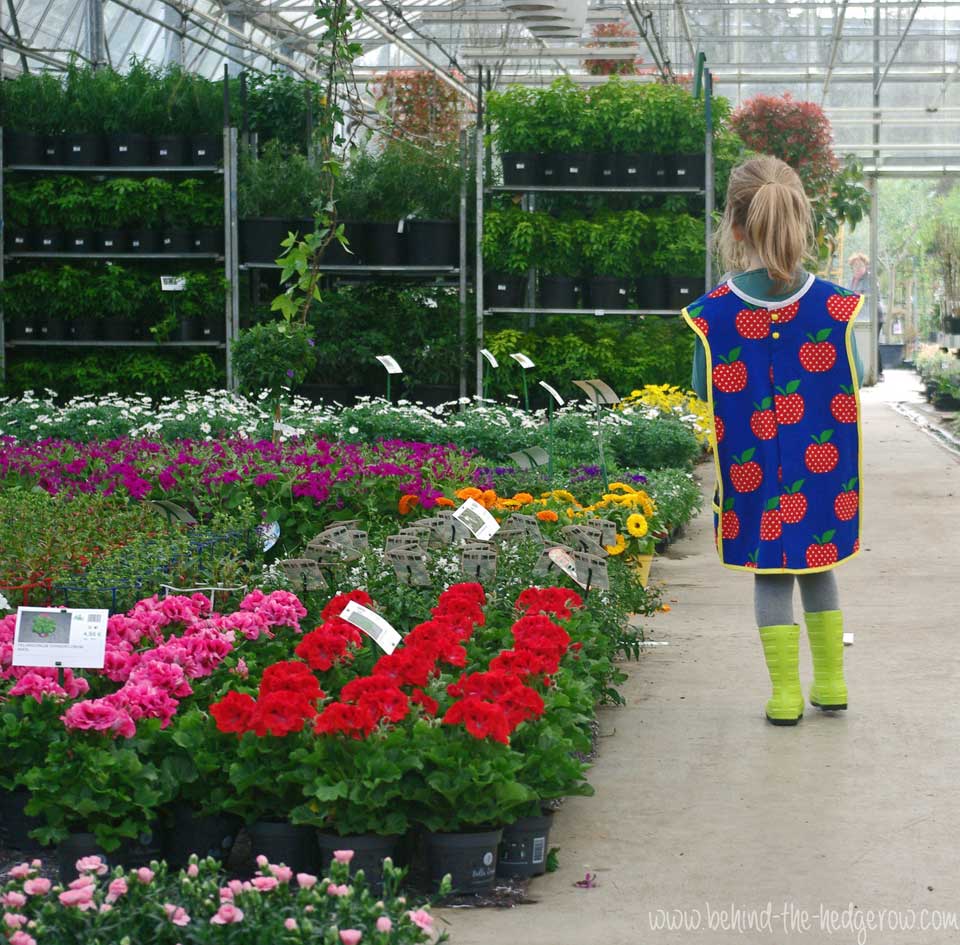 But city living, at least for me and my family, is swiftly coming to an end!  To mark this departure I wanted to sew something for my daughter to suit our new lifestyle which will be less dog shit, cobbles and Belgian beer and more fruit trees, bird song and local cider. 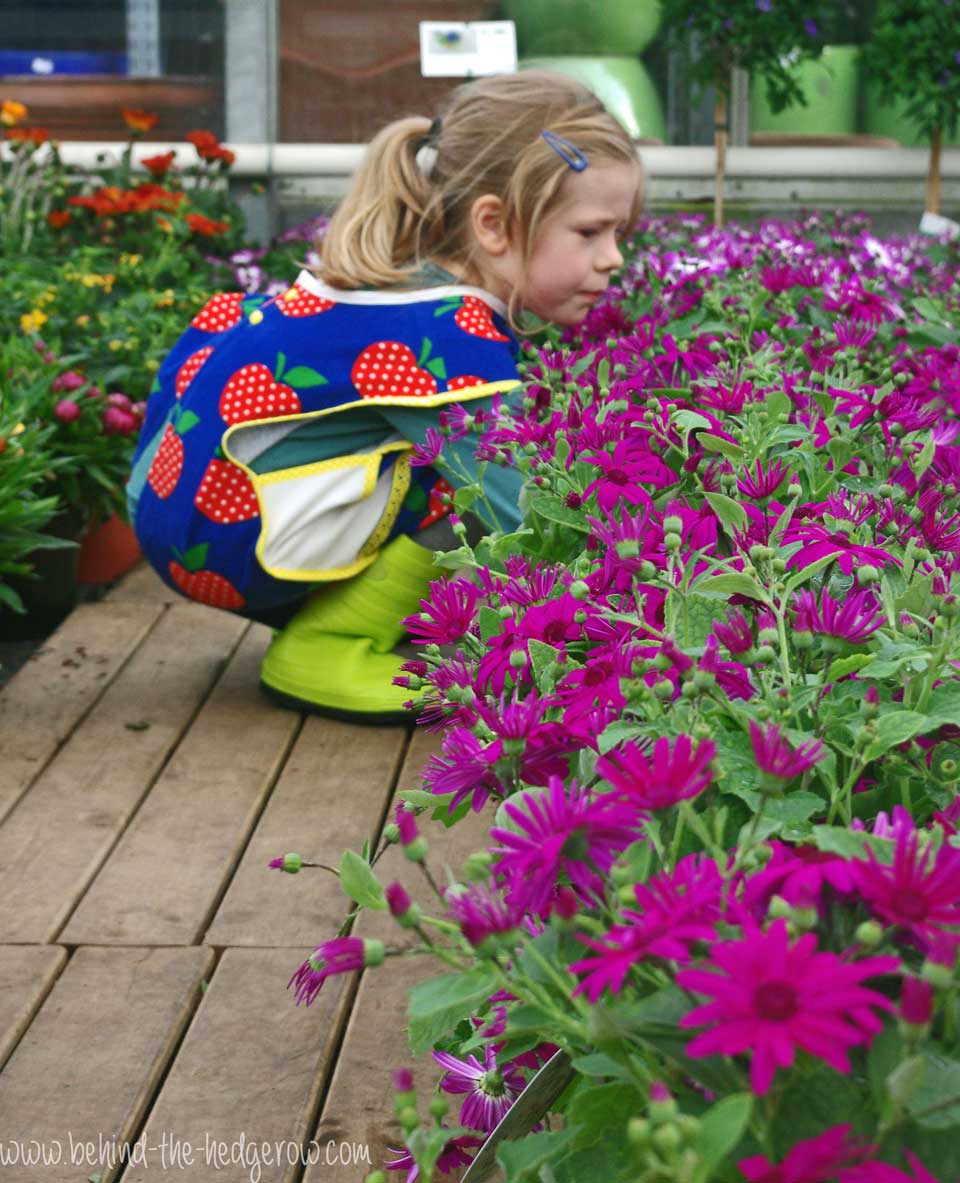 Before I could even consider what this would be Suz (Sewpony) provided me with all the answers!  As part of the Mailbox Surprise series she posted me (aaaaaall the way from Oz) this bright, cheery corduroy fabric.  (You can read all about her fabric thought process here).  It has the colour and style of spring but with a heavier fabric.  Instead of turning it into trousers (my first thought but I didn’t have enough of it!), I decided to use this heavier weight to my advantage and make Margot her first gardening apron.

The pattern is the Bias-trimmed Gardening Apron from Liesl Gibson’s Little Things to Sew book.  I’ve had this book a few years now and each time I open it it’s just as fresh as the first viewing.  I’ve made quite a few items from it including the mittens, bear hat, red riding hood cape, bucket hats, juggling balls, and the tea party doll dress. 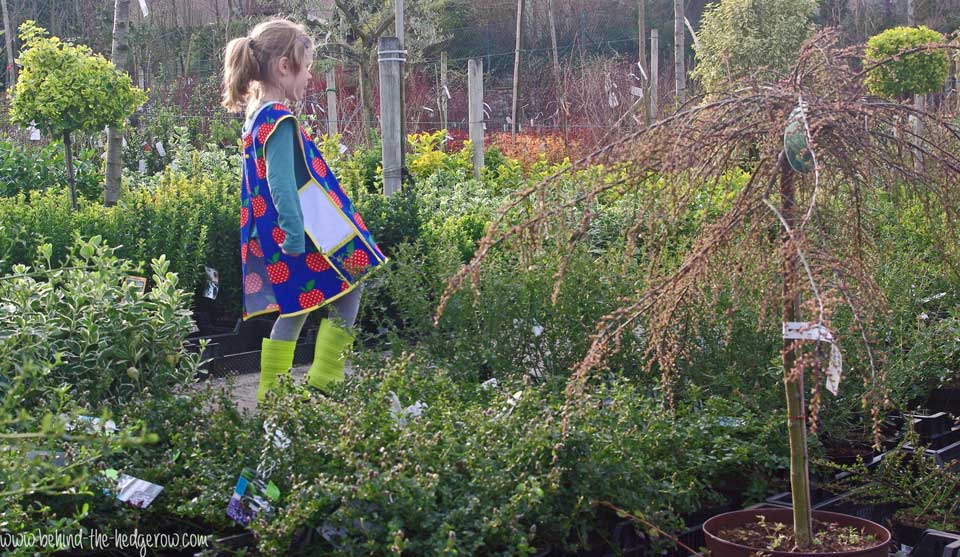 The gardening apron is classified as 2 scissors (out of 4) and it really was a very straightforward project.  Upon deciding to make this pattern in the mid-afternoon I had the whole thing completed before going to bed that evening.  I pretty much followed the pattern apart from two cheats – I used purchased bias binding instead of making my own and I applied the binding with just one instead of two lines of stitching.  I also added these perfectly cheery little buttons to the back instead of snaps.

If you’re new to using bias-binding you can learn to apply it the right way (and make yourself a lovely spring scarf in the process) by following this tutorial.  Of course now I’m being a total hypocrite because I didn’t use this method on the apron but, because I didn’t have to join the ends of my bias together at any point it was easier to cheat. 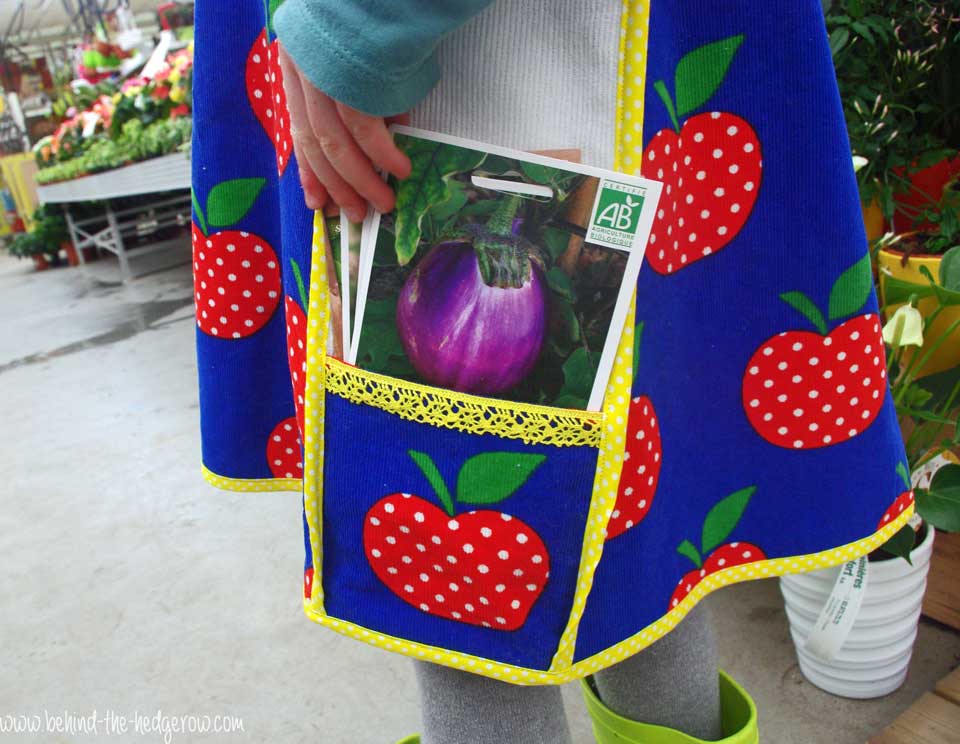 My daughter is 6 and I made the size large which is meant for 6 – 10 year olds.  I knew this would be big but wanted something that would be around for many seasons of gardening.  I did however shorten it a bit so she could move around more easily.

Suggestions.  It’s this sizing flexibility that makes this apron so great.  You can sew them up for gifts and not have to wait with bated breath to see if it fits – just throw it on and they’re good to go!  Also, although labeled a gardening apron, this would also be ideal of crafts, cooking, etc.  A row of pockets along the front would also be nice. 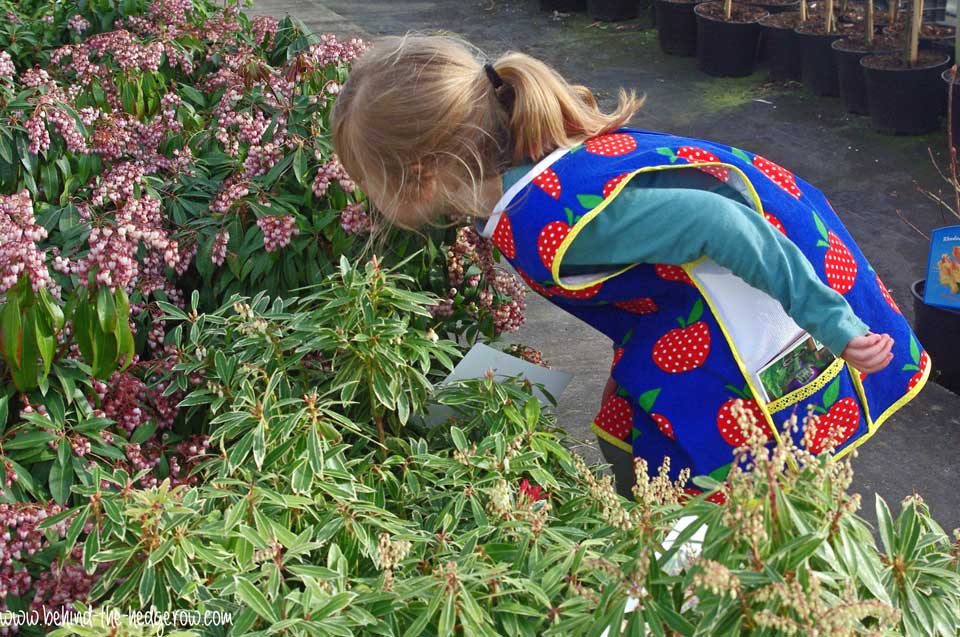 This Mailbox Surprise series has been such fun!  Thanks to Marte and Marta for having me.  Now, what shall be our first gardening project?….. 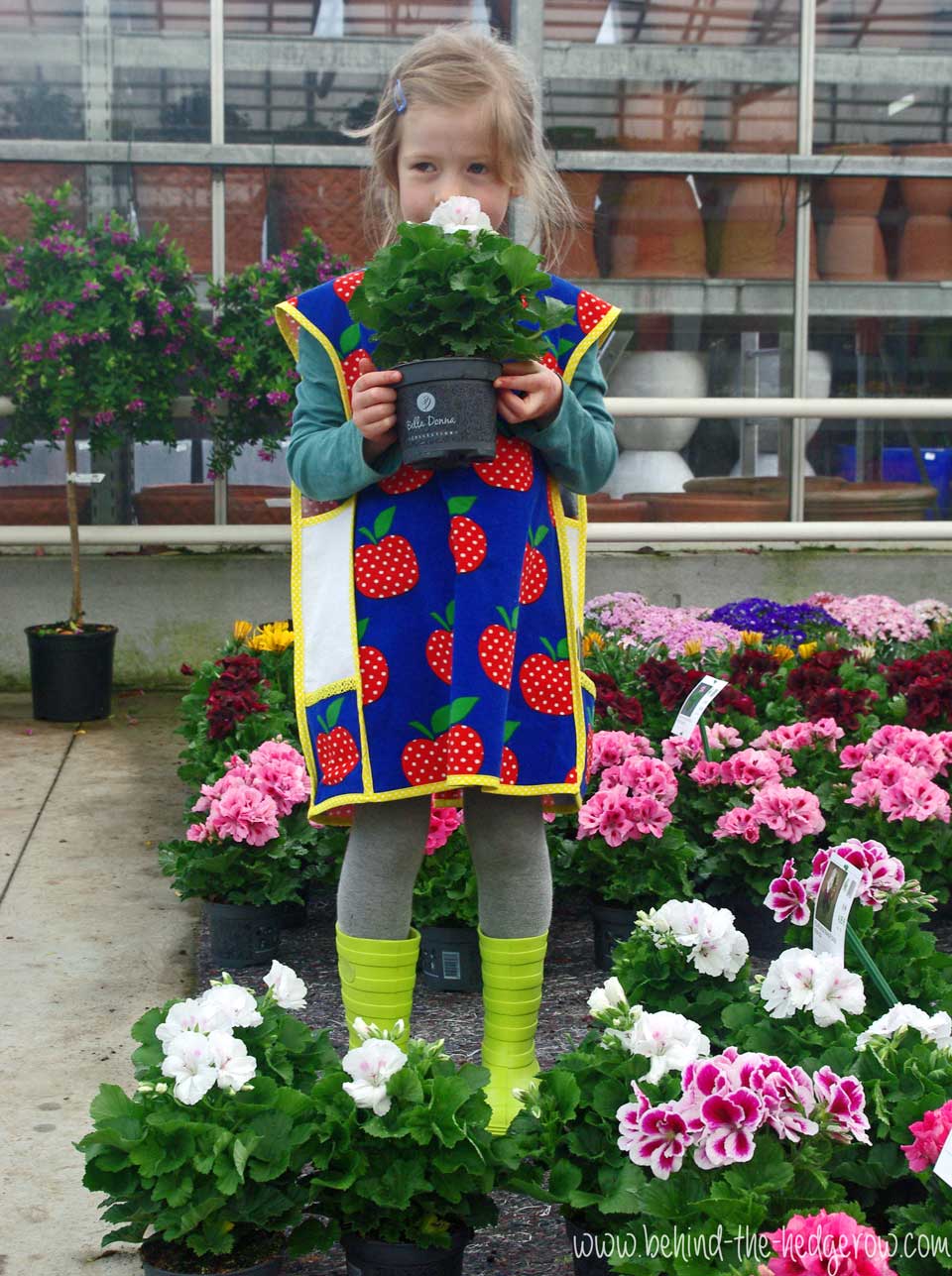 Happy Spring everyone and thanks for reading!  The sun is finally out – yay!!!! 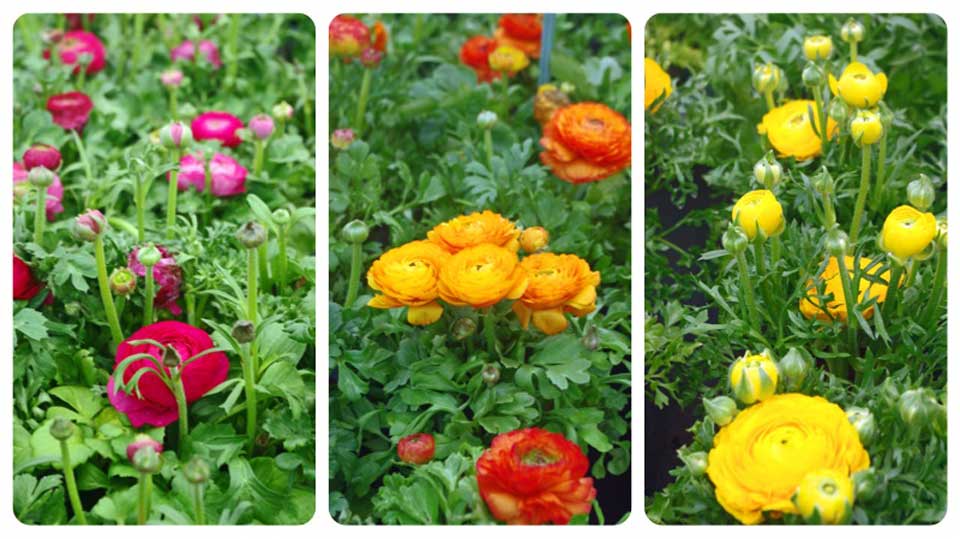 Give away Wednesday: pimp your t-shirts.. Winnaar Wendy Plovie !

Give away Wednesday: pimp your t-shirts.. Winnaar Wendy Plovie !