Welcome to the 3rd session of my sew along for making the Charles’ pants!

We’ll be sewing two weeks and then you pair of sailor pants should be finished. After todays session this is where we’ll end up! Then the most difficult part will be ready yet! Unless you’re not a button hole champion… Worries for next week! 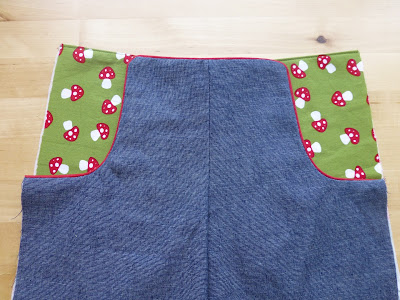 Assembling the back
Just a small notice: although I have blue yarn for my serger, I used red instead. Just a small, nice detail…
First we’ll add the back waistband parts to the basic back part. We’ll have to do this twice (of course). Fold the created seam towards the bottom and iron.
With RST (right sides together), sew the back crotches. Make sure that both parts of the back waistband are lined up nicely.

Now sew / serge both parts of the facing waistband together in the middle. Finish the bottom of this assembled piece with your serger.
Now we can practise our button holes for next week: you will never see these ones on the outside, but still good luck!

Fold the elastic double at the end (both sides) and sew it onto the back waist band with a short stitch.
Now we’ll have to add two very flat buttons before adding the waistband to the rest of the back! Otherwise we’ll have to sew though the back of the waistband also and that would be such a pity… So hold be elastic to the side and sew the two buttons.
Now sew the waistband to the rest of the back. Do this by putting both parts RST.
The back of the sailor pants is finished!
Assembling the pockets

First we’ll have to make a 1cm cut in the pockets and facing pockets parts. I’ve done this at 7cm (orange line = 7cm). The short orange line is where you should make the 1cm cut… 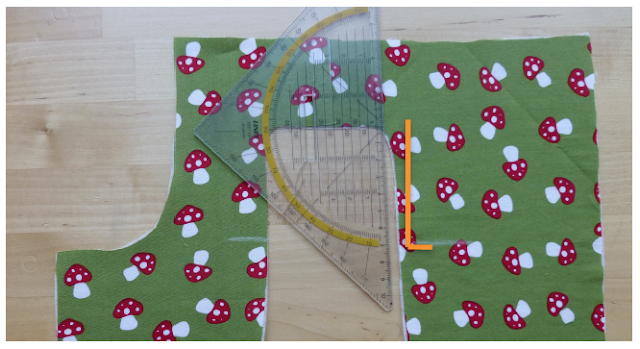 Put the pockets RST and sew at 1cm: starting from the 1cm cut go upwards and stop when you arrive to the long straight side. Cut away the corners and make little cuts in the inwards curve. This way you can tun everything to the right side now. Iron.

Now you sew the rest of the pockets from this point to the left (only on 5mm)! This is because we’ll create French seams for the bottoms of the pockets.
Turn the facing part to the top. See right picture. Then pin the upper part of the facing down to keep it away when sewing. See left picture.

Sew on 1cm under the 1cm cut to finish the French seem. At the cut line, go to 1mm and top stitch the upper part of the pockets to keep everything in place.

Now admire your pockets! Well done. This was the most difficult part. And of course you can practice this a little when creating the second pocket. 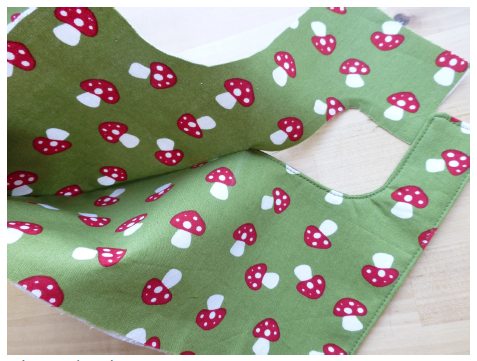 Then you can assemble both pocket parts. Use you serger to do this. Make small cuts at the curved part. Iron everything to the back. Top stitch at 1mm.

This is the result at this stage: 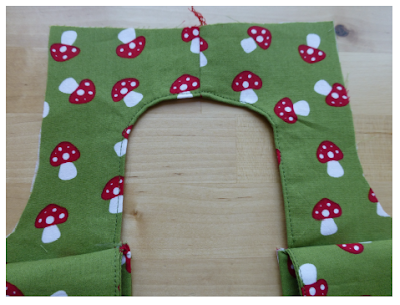 Pin pockets inwards and pin them to keep them away when sewing. Put the jeans RST with the facing. Then sew exactly on the same line / stitch line you’ve just created (red on my picture, because I used the same colour yarn as the colour of the piping).
Cut away the corners. Follow the curve of the piping. Turn the whole construction inside out. This way you can see the result! Nice, no?
Well, I think that more then enough for one week! Hope you learned something new? If you have any questions: just leave a small remark and I’ll come back to you as soon as possible!
Happy sewing!

Leave a Reply to Happy on Sunday Cancel Reply